The United States’ congresswoman-elect Ocasio-Cortez proposes a new policy initiative for a circular economy that is powered by technology. This proposal reportedly will incorporate basic income scheme under the name of the Green New Deal. The initiative was said to echo a similar idea of The New York Times’ columnist Thomas Friedman in 2007 and the New Deal brought by Franklin D. Roosevelt that reformed jobs in the US circa the 1930s.

In regards to this, Quartz (2018) reported that Ocasio-Cortez’s proposal is more ambitious compared to Jill Stein’s Green New Deal that was brought in her 2012 presidential campaign. Greg Carlock and Sean McElwee wrote in The Nation (2018) that the Green New Deal does not only aim to tackle climate change and offer circular economy, but also a job creator, which makes it a good deal as well as good politics. In addition, the program was also said to tackle inequality and poverty which befits the basic income talk under this scheme.

Indonesia, too, has shown efforts to engage in sustainability issues and the emerging high technology sector to advance the economy. Last year, Indonesia established Making Indonesia 4.0 that aims to transform several key areas utilizing 4.0 technologies. Indonesia has also initiated the Blue Economy that expectedly will boost employment and productivity. The crowning moment for Indonesia’s sustainability effort is probably the launch of SDGs Indonesia One last October which has identified 90 projects to be fundedunder its scheme.

There are several parallelisms between US’ Green New Deal and Indonesia’s direction in tackling sustainability issues and technological deployment in aiding development at large.

Green New Deal: What is it?

The Green New Deal as disclosed in Ocasio-Cortez’s website aims to transform several sustainability-related issues. First, converting the energy sector into 100% renewable-sourced and furthering decarbonizing effort. Thus, it also seeks to support this with the construction of national energy efficient smart grid, as well as upgrading residential and industrial facilities with the state-of-the-art energy efficiency and decarbonizing effort from infrastructure to industrial sectors. Second, funding investment to decarbonization, particularly in drawdown and capture greenhouse gasses. Third, establishing leadership in the expansion of the “green” technology, industry, expertise, products, and service, helping countries transform into carbon-neutral economies and the globalization of the Green New Deal.

In addition to this, the Green New Deal has also been linked with the possibility of basic income adoption to tackle inequality and poverty. It was mentioned that the basic income can also help smooth the transition within the non-renewable sectors under the new economy and minimize the impact of the economy. The development itself was predicted to have a significant effect on the workforce.

While it does not particularly convey about the development of cutting-edge technology, its centrality is implied. Technology has a vital role in supporting the green revolution it aspires to bring about under the Green New Deal, predominantly regarding the energy sector.

Sustainability and Tech in Indonesia

Similar to the US, Indonesia, too, has its share in promoting sustainable and technological development through policy. However, the direction Indonesia where Indonesia heads is rather different than the US. Rather than focuses on the green economy, Indonesia opts to develop the blue economy, a marine-based sustainability development program. The blue economy roughly represented 6.7 percent to the Indonesia’s GDP in 2016, absorbing 4.12 percent of Indonesia’s total workforce of approximately 100 million people.

Similarly building economy based on sustainability, the blue economy has several attributes resembling to the green economy proposed by the US in which technology also plays a vital role. According to the World Bank, the blue economy also demand for alternative energy resource and R&D in ocean technology, ranging from implementation in ocean monitoring to carbon sequestration. Since the initiative, several marine technology has been implemented in Indonesia, including FishFace, a technology to gather data on the species caught at sea equipped with facial recognition technology. This technology has supported Indonesia to face the overfishing issue. In addition to the sustainable development effort, Indonesia has also launched SDGs Indonesia One, an integrated funding cooperation platform to support infrastructure development to achieve sustainable development goals, including development, de-risking, financing, and equity fund facility.

To boost the technological side, Indonesia has launched Making Indonesia 4.0 that focuses on the adoption of technology 4.0, such as artificial intelligence and advance robotics, into priority industrial sectors. The blueprint stated about the adoption of sustainability development standard that overlaps with the country’s economic direction.

What can we learn?

While green and blue economy has similar attributes in achieving sustainable development goals, Indonesia’s blue economy and the US’ Green New Deal have different directions. First, the Green New Deal focuses on building clean energy technology infrastructure in the area of settlement and industry facilities for decarbonization while Indonesia seems to aim to tackle marine issues one step at a time. This means that Indonesia’s blue economy has a much wider scope. While the there is a wide range of variables in determining the scope of a program, Indonesia can take a note or two. Narrowing the scope of the blue economy could aid to the development of the program and give a clearer direction in terms of sustainable goals achievement. Coming with a more focused scope, the Green New Deal has a well-defined direction, particularly in the area of technological development and deployment.

Secondly, Indonesia’s effort to boost sustainability development hasn’t been integrated with the development of technology, unlike its counterpart. The Green New Deal ties together the technological advancement strategy to achieve sustainability development goals, particularly in the energy sector and decarbonization exertion, financing scheme, as well as poverty and inequality reduction arrangement. However, Indonesia seemingly tries to combat the interlinked issues from different platforms. 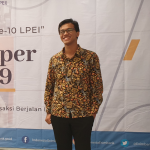